Throughout, Jocelyn Aubrun impresses with his musicianship and virtuosity, equally so Aline Piboule, a partnership presented in a well-balanced and vibrant-sounding recording. This “overview of a year of the flute” is very enjoyable, and some hidden gems have been unearthed, very persuasively.

Cd review: Jocelyn Aubrun and Aline Piboule play those unusual opuses with grace and make them sound like an evidence. Tone very free of the first one, the ample phrasings where the breath never appears, amber color which reminds that of René LeRoy, wide singing but which knows also how to make private conversations – the Sonata of Prokofiev proves it, never so finely detailed without we lose the line of singing, because it always finds the character exact.

A coherent program in the diversity of places, situations, musical circles of the composers, with great works of an intense musicality. (Cd review)

They are exquisitely played by Jocelyn Aubrun and his excellent partner Aline Piboule. Aubrun plays with a beautiful, focused tone, outstanding accuracy, perfect articulation, and a clear love of the music he is performing. Aubrun is a lovely player, musical, and a perfect accompanist. They are a unified team, perfectly matched in style and interpretation.(Cd 1943 Review)

Jocelyn Aubrun and Aline Piboule do not have to prove their abilities anymore, they are obvious in this album of the highest interest.(cd review)

Cd Review (Ravel/Slatkin):” …When appears at dawn Jocelyn Aubrun’s magic flute, with its aqueous medium, it is the veil of the dream that wraps the landscape, moment of pure magic.”

“…With an amazing flute solo from Jocelyn Aubrun”

Cd review: “There is not to wonder, thus, if the name of Jocelyn Aubrun is intended to immortalize the great french flute school tradition (click here to read complete review)”

Principal flutist Jocelyn Aubrun gave a rapturous account of the famous extended solo (Daphnis) which is followed by one of the most exciting orchestral builds in the repertoire.
(click here to read complete review)

Japan : on tour with ONL 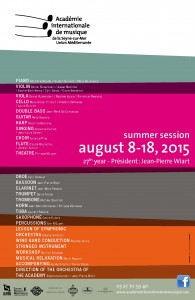 Fantasy for piano / Rhapsody for clarinet

“…with an amazing flute solo from Jocelyn Aubrun…”
Leonard Slatkin

French musician Jocelyn Aubrun has been Principal flute of the Orchestre National de Lyon (O.N.L) since June 2006, directed and conducted by Nikolaj Szeps-Znaider .

Jocelyn won awards at numerous international competitions, (such as Jean-Pierre Rampal in Paris, Krakov and Arles competitions) and is also a laureate of the Natexis Foundation (Fondation Banques Populaires).

He is planning to release a new chamber music album (Philippe Gaubert) with pianist Ursula Alvarez.

His performances have been broadcasted on radios such as France Musique, France Inter, RTS and RCF.
He is frequently invited to give masterclasses (Paris, Genève, Lyon, Nice, Los Angeles, Istanbul…)

He studied at the Conservatoire de Nice (CNR) where he graduated in 2000 with First Prize in piano, flute, music theory and chamber music, and at the Conservatoire National Supérieur de Musique et de Danse de Lyon (class of P. Bernold) where he was unanimously awarded First Prize in flute with honorable mention in 2004 (Master’s degree). He has also worked during his scholarship with Aurèle Nicolet in Freiburg which influenced him greatly.
He also awarded a Master’s degree in baroque flute (class of Serge Saitta) in Haute Ecole de Musique de Genève.

An anthology of works composed in France between 1890 and 1920: Gaubert, Fauré, Debussy, Koechlin, Pierné.(Lyrinx)